Skip To Content
Sponsored Content?
This content is made possible by our sponsor; it is not written by and does not necessarily reflect the views of Bloomberg LP's editorial staff. See our Advertising Guidelines to learn more.
Brought to you by ENEL X

How Electric Buses Are Hailing the Future of City Transport

Bus passengers in Santiago, Chile are getting an easy ride as a fleet of modern electric buses whisks them across the city, offering new levels of comfort, speed and convenience.

Over 450 electric buses glide noiselessly through the Chilean capital’s streets, offering air-conditioning, pneumatic suspension, onboard Wi-Fi and phone charging points. The buses don’t belch toxic fumes like their diesel predecessors and produce much lower carbon emissions, and perform well, offering a smooth ride on the city’s steep inclines. They are popular with the public, and fare-dodging and graffiti have decreased.

Across the world, cities are looking to early adopters such as Santiago as they seek to slash carbon emissions and cut air pollution by switching to electric buses. This clean mode of transport is proving cheaper, more sustainable and quieter than the diesel-powered growlers that clog up many city centers today.

The United Nations forecasts that 2.5 billion more people will live in cities by 2050—accounting for two-thirds of the world’s population. Urban areas occupy only 2% of the world’s landmass, yet they consume 70% of the energy produced worldwide and emit 75% of the world’s greenhouse gases—figures set to increase as urban populations rise.

Three million city buses already operate globally, and today more than 13%, over 385,000, are electric vehicles. Electric buses will go a long way toward reducing the growing share of carbon emissions produced by city transportation systems, which face a huge increase in passenger numbers over the next 30 years as urban populations rise.

“The electrification potential in Latin America is immense. Enel X has boosted the development of public transport by delivering and financing smart recharge infrastructure and energy services to 957 electric buses in Chile, Colombia, Uruguay and Peru. We are already working to add more than 800 buses in several countries in the region by 2021,” explains Simone Tripepi, Head of Enel X South America. “We continue to plan in conjunction with companies, partners, public administrations and investors, to increase public electric transport over the next 10 years, achieving significant health benefits for the inhabitants of Latin America.”

“Enel X’s successful experience in Latin America is paving the way for the Enel group to export such innovative business model to other regions globally.”

But introducing electric bus fleets presents a series of challenges for city authorities and transport operators. There is a high initial investment, although this is offset by lower operating costs. Pursuing an electric transportation strategy might also mean rethinking cities and updating transport infrastructure. Electric bus systems require charging infrastructure and can be optimized using smart bus stops, digital payment systems and software that gathers data on vehicle movements.

Bus electrification goes beyond simply substituting traditional fuel-burning buses with electric ones, and requires the coordination of a wide range of skills and resources involved in mobility planning and energy management. Electrification processes need to adapt to the needs of each city and its population, as an individualized approach ultimately saves time and money and creates a more effective solution.

These challenges will only be met through public-private partnerships between national governments, city authorities, vehicle manufacturers and technology companies.

The project to introduce electric buses to Santiago’s public transport network has been underway for four years. It was made possible by an innovative public-private partnership between Chile’s Ministry of Transport, bus company Metbus, Chinese bus manufacturer BYD and Enel X, which provides the entire project (electric buses, charging infrastructure, smart bus stops, bus depot construction, energy infrastructure O&M) as a service with an end-to-end approach.

At the heart of an effective electric bus service is the provision of a smart recharging system. The charging terminals in Santiago implemented by Enel X use a unique system that maximizes efficiency of energy consumption. While an electric bus costs more than a diesel vehicle, smart charging keeps the running costs far lower. In Santiago, the cost of operation per kilometer is 70 pesos ($0.09) for an electric bus compared to 300 pesos ($0.39) per kilometer for conventional buses. 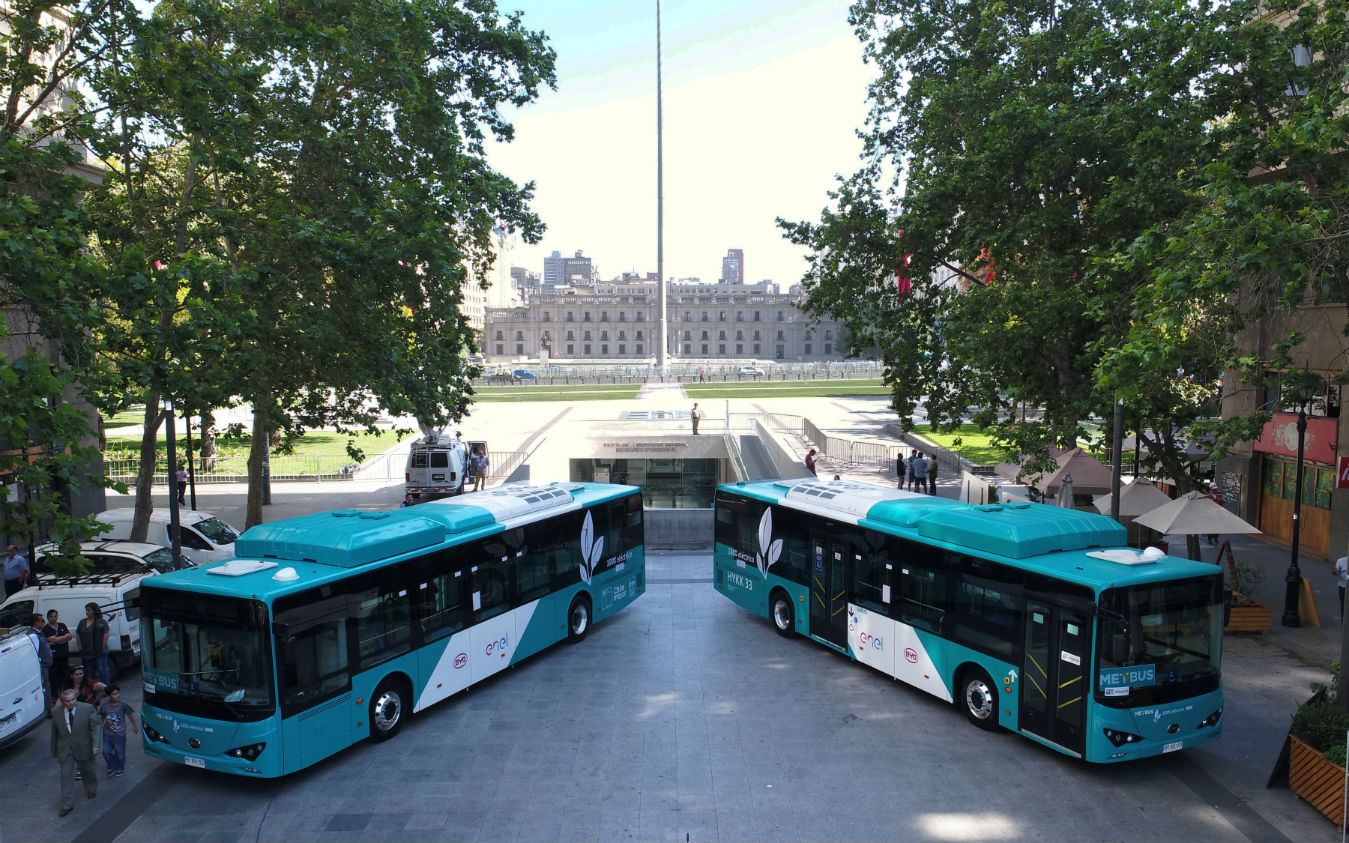 Enel X technology on the streets of Santiago, Chile

The system connects the retractable arms on the roof of each bus with charging columns, and in a few minutes the system gives the buses enough charge for their 12 km round trip. Chargers have also been installed to completely charge the bus batteries in two to three hours at the bus depot—part of the ZeEus project, a European-backed project to promote a “Zero Emission Urban Bus System.”

Meanwhile, in Colombia’s capital, Bogota, Enel X electrified four bus depots with a total of 256 charging points as part of the TransMilenio project, which plans for 477 electric buses to be in circulation by the first quarter of 2021. According to Enel X, this project gives Bogota the largest electric fleet in operation among all Latin American cities.

This is the company’s first foray into electrification of the American transport sector, as Enel X launches a range of services to help electrify bus fleets for the Massachusetts Bay Transportation Authority and the Hopkinton, Mass. school district. In Hopkinton, Enel X will deploy smart charging technology to optimize charging sessions and also provide energy services to the grid.

The switch to electric buses globally is a key step in the move to create smart cities. Public authorities are making use of the latest technology, software and data management techniques to create clean, sustainable and efficient urban spaces to accommodate growing populations. Enel X believes offering public transport operators an integrated project with a long-lasting relationship and an end-to-end approach is the best way to maximize savings and environmental benefits.

Finding a technology partner that can work with municipal organizations to integrate the complex requirements of smart city development is a major challenge for public authorities. Enel X offers a range of technology and digital platforms for solving some of the trickiest smart city challenges. These cover the entire city ecosystem including lighting, building management, public and private transport, mobility and logistics.

Electric buses offer a clear win for the public, making journeys smoother, quieter and cleaner. They also encourage car drivers and passengers to reduce their carbon footprints by taking public transport. As citizens grow accustomed to the cutting-edge advantages of these electric vehicles, they will be keen to get on board for the journey to smart, sustainable cities.