Sponsored Content ?
This content is made possible by our sponsor; it is not written by and does not necessarily reflect the views of Bloomberg LP's editorial staff. See our Advertising Guidelines to learn more.

Brought to you by AXA Investment Managers
How Can Asia’s Megacities Thrive in a Changing Climate?
Dec 05, 2019 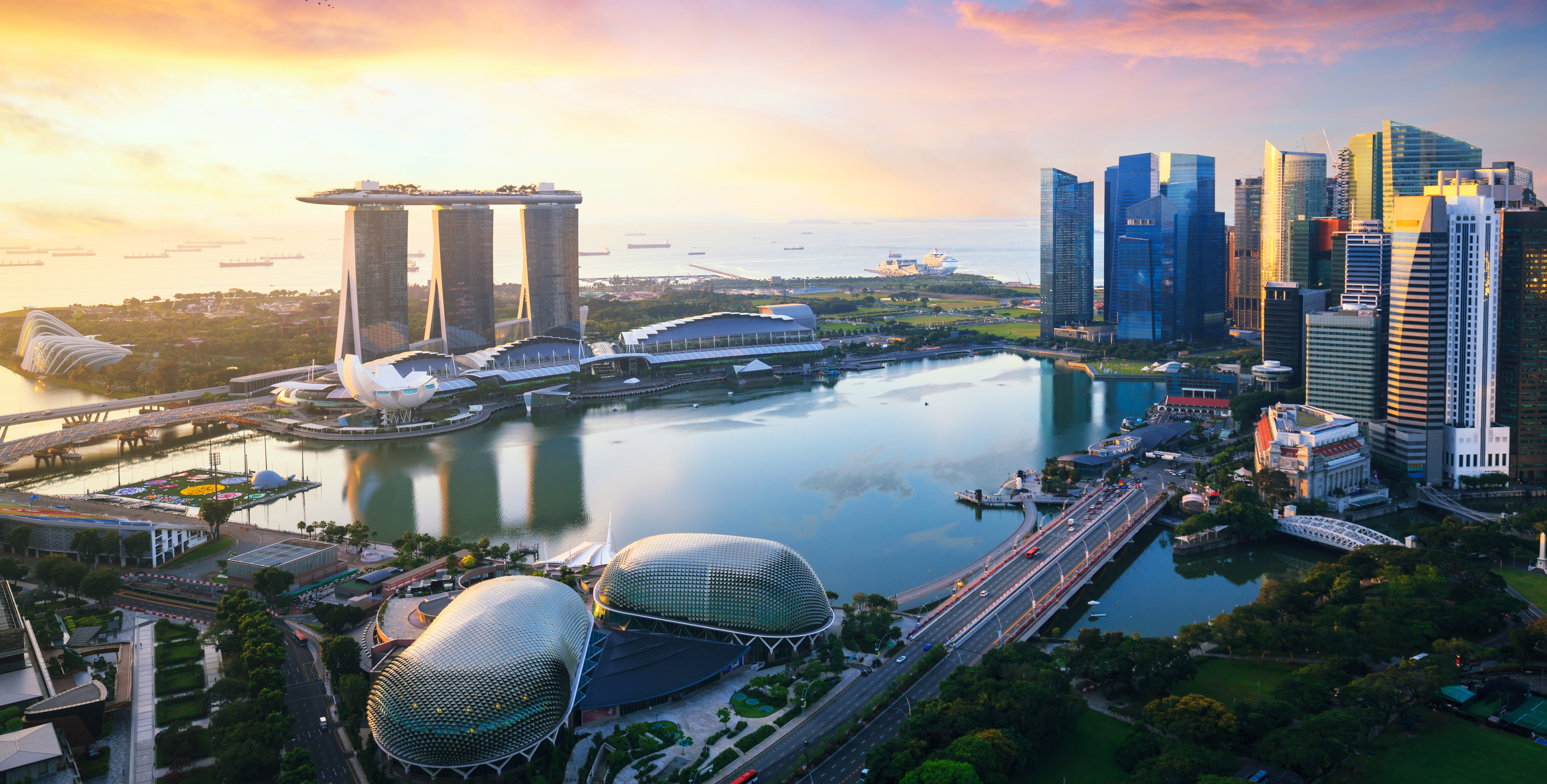 BROUGHT TO YOU BY

By 2025, Asia will be home to 33 of the world’s 49 megacities, according to GlobalData. The rise in the number of megacities—those that are home to more than 10 million people—is the most visible evidence of the accelerating global trend toward urbanization.

“Around half of the world’s population today live in urban areas,” says Yo Takatsuki, Head of ESG Research and Active Ownership at AXA Investment Managers (AXA IM). “Over the next three decades, that proportion will rise to three-quarters.”

Many metropolises are now bigger, in terms of both population and GDP, than many individual countries. For instance, Tokyo’s $1.5 trillion economy is larger than Spain’s $1.42 trillion, while both Shanghai ($495 billion) and Beijing ($459.6 billion) have economies bigger than those of Argentina ($475.4 billion) and Norway ($439.5 billion), according to GlobalData.

GlobalData reports that in 2025, Asian megacities are expected to contribute 9.4% to global GDP and 6.6% to total world population.

This rapid urbanization has consequences for both residents and the environment. The pollution that afflicts some of Asia’s biggest cities, from New Delhi and Bangkok to Beijing, highlights that many cities have grown faster than their infrastructure can cope with.

“These cities have rapidly industrialized, with factories and infrastructure being built at breakneck speed,” Takatsuki says. “Many cities lack the capabilities to deal with sewage and waste, so that leads to pollution of waterways. It’s one of the key challenges for these cities.”

These cities must do all of this as they face the growing threat of climate change, whose impacts are becoming increasingly clear. Extreme weather events, failure of climate change adaptation and natural catastrophes are among the top 10 risks for business leaders in East Asia and the Pacific according to the World Economic Forum’s Regional Risks Report

How Cities Can Respond to the Threat of Climate Change

The key to responding to climate change is to make infrastructure, housing and all other urban aspects more resilient, but some cities are better prepared for this than others, says William Chuang, Portfolio Manager at AXA IM. “Seoul, for example, has been pretty successful over the last 50 years, moving from a low-income, industrialized city to a very urbanized city with high-value tech jobs.

“A city such as Dhaka, Bangladesh has not been able to do the same because it has not had the necessary infrastructure in place,” adds Chuang. “To develop in a clean, sustainable way, you need to install transportation, housing and electricity infrastructure first. Once people are living on the land, it’s very difficult to install new facilities.”

Governments are starting to focus on resilience in response to climate impacts. Singapore, for example, where 30% of the land is less than 5 meters above sea level, will invest S$400 million ($294 million) over the next two years to upgrade its drainage systems, according to Bloomberg. Plans are also in place for 80% of buildings to meet the nation’s Green Mark eco-building standard by 2030.

Singapore’s Prime Minister Lee Hsien Loong has said that the city-state might have to spend about S$100 billion ($72 billion) over the course of the next 100 years to protect itself against rising sea levels. New buildings must be built on ground at least 4 metres (13 feet) above water. The newest terminal at Singapore’s Changi Airport will be built 5.5 meters (18 feet) above sea level.

Meanwhile, neighboring Indonesia is considering taking the drastic step of moving its capital from Jakarta, where severe subsidence caused by over-abstraction of water is exacerbating the threat from higher sea levels—almost 1,500 km (930 miles) to an undeveloped part of Borneo. Similar calls to relocate Thailand’s capital from Bangkok, because of problems with pollution and overcrowding, have been considered.

China, the world’s largest emitter of CO₂, aims to double the proportion of green buildings under construction in urban areas by the end of 2020, as part of the country’s 13th Five-Year Plan, according to Bloomberg Intelligence.

Not all cities have the resources of Singapore, Jakarta, Bangkok or Beijing to tackle climate impacts. However, a wide range of low-tech solutions can be very effective, such as nature-based systems and green infrastructure, including creating wetlands for flood control, greywater recycling to manage pollution and green roofs and walls to cut energy use and greenhouse gas emissions.

The U.K.-based organization Acclimatise reports that smart surface technologies, such as green roofs, help manage high temperatures by reflecting light and heat rather than absorbing it. Green roofs can also reduce flooding and improve water quality–the vegetation and soil absorbs rainwater and filters out impurities.

“Investment in the green economy offers jobs across a wide range of skill levels with relatively low entry barriers,” states Acclimatise. “Installing smart surfaces in urban areas would help create relatively well-paid jobs and increase the availability of positions in construction,” the report adds. Meanwhile tree planting and the use of reflectivity could cut urban temperatures by 2–3°C.

Cities can leverage their infrastructure, technological expertise and finance to scale up clean-tech solutions including waste treatment systems. They can also harness technologies that make buildings and cities more energy- and water-efficient. Kolkata, for example, has created India’s first flood forecasting and early warning system

The rise of green financing is helping to ensure more sustainable development of Asian megacities. Green bonds are issued with the express intention of using the proceeds for projects that support a low carbon economy, for instance climate adaption projects. The market has expanded rapidly over the past few years, with 2019 likely to see a new record for issuance.

In the past, Asia has lagged behind in green bond issuance but by the end of October of this year, almost $19 billion had been issued across 44 green bonds in the Asia Pacific region open to international investors, according to Dealogic, with activity led by China and South Korea. The 2019 figure from Dealogic compares with $17.68 billion from 43 issuances for all of 2018.

In 2025, Asian megacities are expected to contribute 9.4% to global GDP and 6.6% to total world population.

Hong Kong raised more than $1 billion when it issued its first green bond in May 2019, according to Bloomberg. Following the launch of the oversubscribed bond, the Hong Kong Monetary Authority reported that 50% of investors were from Asia, 27% from Europe and 23% from the U.S., illustrating the increasing appetite for green finance in the region.

The World Resources Institute reports that, “by issuing bonds, public and private [enterprises] can borrow money from investors—at lower costs—for projects like climate-resilient crops, sea walls to stave off rising sea levels or the installation of early warning systems to alert people to extreme weather events.”

According to the World Wildlife Fund, Asia needs $5 trillion of sustainable development investment by 2030, of which the Association of Southeast Asian Nations accounts for $3 trillion. As Jeanne Stampe, Head of Asia Sustainable Finance at the World Wildlife Fund and founder of the Asia Sustainable Finance Initiative, explains, “Governments cannot provide all of this finance alone and need private-sector capital.”

Building sustainable, climate-resilient infrastructure for Asia’s growing population represents a formidable challenge. And while government initiatives and programmes will help, there is clearly a sizeable opportunity for the investment community to enable the region to make the important transition to a more sustainable future.

This document is for informational purposes only and does not constitute investment research or financial analysis relating to transactions in financial instruments as per MIF Directive (2014/65/EU), nor does it constitute on the part of AXA Investment Managers or its affiliated companies an offer to buy or sell any investments, products or services, and should not be considered as solicitation or investment, legal or tax advice, a recommendation for an investment strategy or a personalized recommendation to buy or sell securities.

Due to its simplification, this document is partial and opinions, estimates and forecasts herein are subjective and subject to change without notice. There is no guarantee forecasts made will come to pass. Data, figures, declarations, analysis, predictions and other information in this document is provided based on our state of knowledge at the time of creation of this document. Whilst every care is taken, no representation or warranty (including liability towards third parties), express or implied, is made as to the accuracy, reliability or completeness of the information contained herein. Reliance upon information in this material is at the sole discretion of the recipient. This material does not contain sufficient information to support an investment decision. Issued in the UK by AXA Investment Managers UK Limited, which is authorised and regulated by the Financial Conduct Authority in the UK. Registered in England and Wales No: 01431068. Registered Office: 7 Newgate Street, London EC1A 7NX.

In other jurisdictions, this document is issued by AXA Investment Managers SA’s affiliates in those countries.